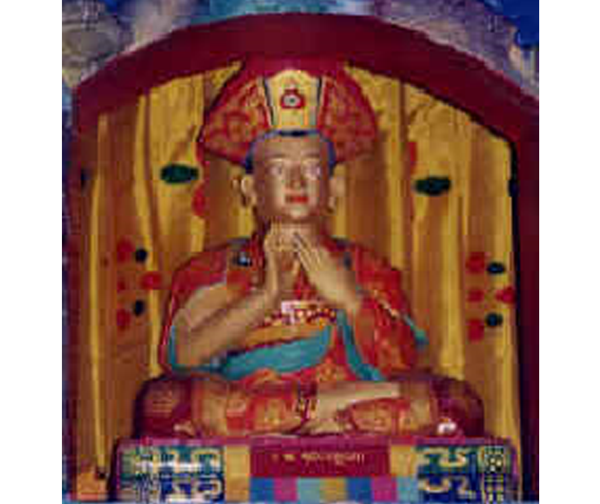 The lineage acquired the name Drukpa in the twelfth century when, assuming the human form, Avalokiteshvara - the Great Lord of Universal Compassion - manifested in Tibet as the outstanding disciple of Mahasiddha Lingchen Repa. This sublime being was called Drogon Tsangpa Gyare, the meaning being: Drogon - the Protector of Beings; Tsang - born in the land of Tsang; Gya - from the noble clan of Chinese (Gya) origin; Re - a cotton-clad yogi.

“Druk” in Tibetan means “Dragon” and it also refers to the sound of thunder. In 1206, exactly 800 years ago, Tsangpa Gyare Yeshe Dorje saw nine dragons flew up into the sky from the ground of Namdruk, and he named his lineage “Drukpa” or “lineage of the Dragons” after this auspicious event. In this way, Tsangpa Gyare became the founder of the lineage and was known as the First Gyalwang Drukpa.

Tsangpa Gyare was prophesized in many Sutras and Tantras and was recognized as the indisputable emanation of Naropa (1016-1100). In the Fundamental Tantra of Manjushri (Toh. 543), Buddha Shakyamuni spoke of the coming of Tsangpa Gyare: Sonam Nyingpo will appear, in his future incarnation in the land of snows. He will be born in the Hwashang (Chinese) race and given the name Gelong Yeshe Dorje. He will renounce worldly existence and voluntarily embrace the essential meaning. He will establish sentient beings in liberation, and while abiding in the essence free from the two extremes, he will flourish my doctrine.

Tsangpa Gyare’s great great grandfather was one of the two strong Chinese men who were selected to pull the royal chariot that carried the precious statue of Jowo Shakyamuni to Tibet when Chinese Princess Wencheng of the T’ang Dynasty married the famous Tibetan King Songtsen Gampo (617-650). In the early part of his life, Tsangpa Gyare was called ‘Gyaton’ which literally means ‘Chinese teacher’.

In his life, Tsangpa Gyare unveiled many treasures of holy teachings and objects in Southern Tibet, and he also discovered Tsari, a very famous, holy and powerful place in Tibet. Because of his spiritual attainments, Tsangpa Gyare became popular as Druk Tamchay Khyenpa, the Omniscient Dragon, and reverentially called ‘Je Drukpa’ (Lord Dragon master). He was a famous teacher whose teachings were sometimes attended by as many as 50,000 people at any one time. It was recorded that he had 88,000 eminent followers, of whom 28,000 were enlightened yogis. His order became famous for the purity, simplicity and asceticism of its adherents and the profundity of its spiritual teachings. He wrote a renowned commentary on the Tantra of Chakrasamvara and taught widely.

When Tsangpa Gyare passed away in 1211, on the cremation day, a rainbow canopy appeared and showers of flowers fell. Many could hear celestial music and smell a beautiful aroma in the atmosphere. When his body was cremated, his heart, tongue and eyes remained intact. His skull bore the images of Arya Avalokiteshvara, Manjushri and Vajrapani; the twenty-one joints of his backbone turned into twenty-one mini statues of Avalokiteshvara. Many of these relics are still available in various Drukpa monasteries for reverence and these are proofs of Tsangpa Gyare’s spiritual attainments.

The Kingdom of Bhutan, considered as one of the few remaining Buddhist kingdoms in this world and a pure land in the Himalayas, also takes the name of “Druk” or “Druk Yul”, meaning “the Land of the Thunder Dragons” and its people are also known as “Drukpa”. This is because in the 17th century, one of Tsangpa Gyare’s fourth incarnations, Shabdrung Ngawang Namgyal (1594-1651), united the warring regions in Bhutan and became the political and religious leader there. During his reign he was responsible for the construction of many fortress palaces and monasteries as well as devising many of Bhutan’s customs, traditions and ceremonies. This forged a unique cultural identity distinct from Tibet.